Find Vape Shops Near You With Our Interactive Map Below
Home » Vape Shops » Are E-Cigarettes Less Toxic And Harmful Than Cigarettes? 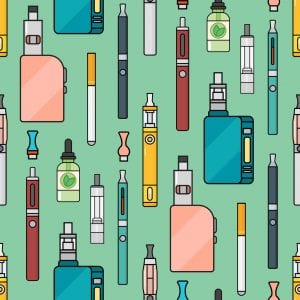 For a long time, we generally considered e-cigarettes as safer as they produced far few toxins than traditional cigarettes. However, with time, we have realized that this frame of the subject matter does not tell the full story of the health impact e-sign produce. Recent evidence suggests that vaping also pose their own unique health dangers.

In recent months, there has been an increased number of lung injuries caused by vaping, lending credence to the appeals for more caution while vaping. Although the substantial number of recent lung injuries have seemingly been caused by THC vaping and CDC has recently reported its concerns with vitamin E acetate, the agency still cautions vaping users across the board. The agency is still in the process of conducting thorough investigations. As such, the CDC recommends caution with any kind of vaping. At the very least, the outbreak in lung injuries demonstrates the dangers of the unregulated inhaled substances market that go to market without premarket reviews to ascertain its safety.

With the above in mind, we also have to acknowledge the claim from Public Health England that reckons e-cigarettes as 95% safer than normal cigarettes. It should be noted that this study was conducted in 2015 before the rise of lung injury cases. Further scrutiny of the original research shows that the evidence for that particular statistic remains incomprehensive and unclear at best e-cigarette.

There are other concerns about the authors and the conflict of interest concerning the funding. The claim made by Public Health England does not acknowledge the potential for adverse side effects among e-cigarettes users who have never used tobacco products. The claim also neglects to recognize the lack of long-term clinical study on these products on human beings.

A 2018 report published in the National Academies of Sciences, Engineering, and Medicine indicated that vaping exposes users to far few toxic substances compared to combustible cigarettes, new studies show that that is not the end of the story as far as health impacts are concerned. Reports suggest that e-cigarettes might have their own set of unique health risks affecting the cardiovascular and respiratory systems. Importantly, given how new the product is in the market, there is a need for further research studies to evaluate both the short and long term health impacts of vaping and e-cigarettes.

It is important to note that while the technology that powers vaping is consistent, there is a lot of variability on the products category front. There are no typical e-cigarettes as the product consists of different concentrations of nicotine, ingredients and various hardware. Some also have potentially toxic chemicals and heavy metals such as nickel, lead, cadmium, copper, and tin. As such, it is difficult for public health recommendations about product categories. This demonstrates the need for pre-market reviews of the products.

Consumers ought to know the product they purchase and whether it is safe – especially for inhaling. Growing evidence lung injuries and other health risks associated with the use of e-cigarettes have led to health officials and researchers to question whether they are safer than combustible cigarettes.