Find Vape Shops Near You With Our Interactive Map Below
Home » Vape Shops » Is Vaping Better For You Than Smoking?

Is Vaping Better For You Than Smoking? 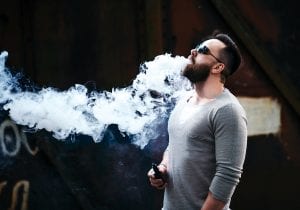 Smoking is one of the biggest threats to public health, and there are few people who would argue with the idea that smoking is bad for you. While tobacco use has been falling steadily, cigarettes still contribute to around half a million deaths in the United States every year.

Over time, smoking has caused ten times the number of American deaths as all of the wars the U.S. has fought in combined. It is a bigger killer than illegal drugs, motor vehicle crashes, HIV, and alcohol. Cigarettes are dangerous for the body, and doctors have been encouraging people to quit smoking for many years.

In order to reduce the harm that cigarettes cause, some people have turned to e-cigs, or vaping, instead. The hope is that these devices, which still provide a nicotine hit, can help people to enjoy the feeling of smoking without the exposure to dangerous ingredients. E-cigarettes can help people to wean themselves off cigarettes, and in that respect they are a good thing, but is vaping actually better than smoking if your intent is to keep doing it for the long term?

So far, there has not been a lot of research done into the long-term health effects of vaping compared to smoking. Vape devices are comparatively new, and the evidence that is available so far is mixed. E-cigarettes do appear to be less damaging to human health than smoking, but that is a very low bar considering how dangerous cigarettes have been proven to be. Less harmful, sadly, does not mean safe.

Many of the same health concerns that exist about smoking now exist about e-cigs. They can be addictive, they can damage the heart and lungs, and cause other injuries too.

Smoking and vaping both rely on heating a substance before the user inhales it. Beyond that, the processes are different, however. One of the main reasons that smoking is dangerous is because it requires tobacco to be burned, and when tobacco is burned the chemical process causes the formation of harmful substances. It is those substances which are then inhaled.

Filters can capture some of the harmful substances, but they do not capture them all. Some people even have a habit of inhaling more deeply to get around the filter, and this draws the dangerous chemicals even deeper into the user’s lungs, where they can cause more damage.

Since e-cigs have not been on the market for as long as tobacco cigarettes, it is still unclear how dangerous they are. We do not know for sure what the impact of long-term use of e-cigs could be. Recent research, however, suggests that vaping could indeed increase the risk of long-term health conditions, including cancer, respiratory issues, strokes, and other issues that smokers are typically at risk of.

How Long Can Your Vape Coils Last?

There’s Something You Should Know about Clone Vape Mods